‘A bear teaches us that if the heart is true, it doesn’t matter much if an ear drops off.’ Helen Exley.

Last weekend I started my usual annual spring clean and clear out.  I had a plan.  I would start with the easy rooms first, the bedrooms.  They wouldn’t take long.  Just move the furniture, get into the corners that haven’t been got into over the winter, wash the curtains, clean the windows, wipe down the walls, clean the carpets, go through the wardrobes . . .

Okay.  Maybe this was going to take a little bit longer than I originally thought . . .

It doesn’t really help that I can be so easily distracted from the task at hand.  There I was, beavering happily away, when I glanced at the bed (where all three girls were comfortably ensconsed ‘supervising’ the proceedings) when I noticed that as Maudie was watching me she was also happily chewing on one of my teddy’s ears.  ‘No Maudie,’ taking it gently from her.  ‘That’s not your bear, that’s my bear.’   (Maudie looked somewhat crestfallen—he was obviously a very tasty bear.)    But as I moved that little (slightly dusty, slightly dog-chewed) teddy out of harm’s way it occurred to me that I really had no idea where this bear had come from—or even how long I had owned him (for he definitely was a he-bear—he was wearing a bow tie).

It turned out that I had eight (yes, eight) teddies living quietly in that first bedroom.  Two of them were gifts I received many many years ago—my Paddington Bear (red wellies and all) which my mum gave me and my ‘Berliner Bear’ which someone gave me for my 21st birthday—but where the other six came from I have no clue.  I can only assume I must have bought them for myself over the years.  Why I still have them in my bedroom now (i.e. how they have all managed to survive my many decluttering rampages) I am not so sure.

I don’t remember having a beloved teddy as a child—dogs and cats were always my cuddle-buddies when I was a kid—but perhaps by subconsciously collecting them now I am mourning some sort of latent childhood loss?  (I was deprived!  I never had a teddy!)  Er . . .  maybe not . . .

I do admit though there is something innately precious about a teddy bear.  Any teddy bear. There’s something about their little furry bodies and the wise little faces.  I mean—what’s not to love?

My old dog Harry was only 10 weeks old when he adopted ‘Teddy’ and his devotion was soon absolute.  For all his long life Harry would not settle to sleep without his beloved bear.  He would carry Teddy carefully into his bed, tuck him gently up underneath him and drop off to sleep with his head resting gently on Teddy’s cheek.  When Harry passed peacefully at the age of nineteen I buried Teddy with him.  How could I not?

So perhaps that is the connection for me.  Perhaps when I see any teddy now it reminds me of that patched, balding, chewed on (and exceedingly smelly) bear that brought so much joy and comfort to my lovely and still greatly missed boy.

Okay.  Maybe I can see why those teddies are still in my bedroom after all.  I reckon they can all stay a little bit longer . . . 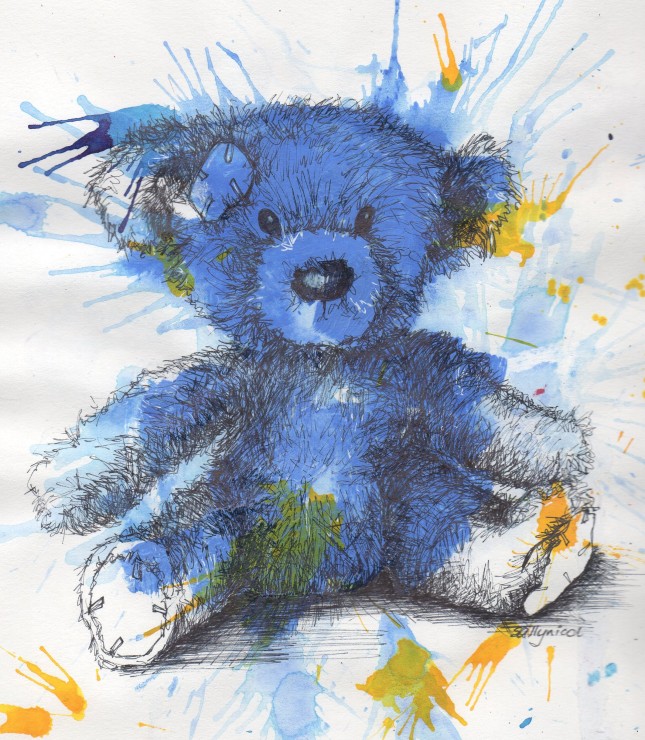 Posted by sallyinthehaven on November 3, 2017 in Uncategorized