RSS
← ‘Give a girl the right shoes and she can conquer the world.’ Marilyn Monroe.
‘In ancient times cats were worshipped as gods; they have not forgotten this.’ Terry Pratchett. →

Stories from my Sketchbook . . .

I blame Megan.  Seriously.  I hadn’t thought about licorice in years.  I don’t remember the last time I even ate a piece of licorice.  But just after Halloween, while we were discussing the perils and pitfalls of buying the right ‘type’ of Halloween sweeties for children, Megan (our newest staff member at the college) related a story about how some kiddies had come to her home trick-or-treating and all she had to left to offer them was licorice. The children were less than impressed ( . . . ran screaming from the building . . . )  That was it.  Just a short funny little story about licorice.  But the weird thing is,  since then it’s all I’ve been able to think about.   I have developed a real craving for licorice . . .

I know licorice is not for everyone.  There seems to be no grey area—people either love it, or they hate it.  I love it.  All sorts (see what I did there?) but sadly, these days, when it comes to confectionery at least, it has become harder and harder to find real licorice that hasn’t been drastically tampered with.  Although I still love the idea of licorice straps, licorice jelly beans, chocolate covered licorice, and coloured licorice, many of these products don’t actually contain much (if any) real licorice.  Instead, they contain anise oil  which has the smell and taste of black licorice but it’s not actually the real deal.

Mmmmm—black licorice.  Makes my mouth water to think of it.   And, of course, once I had the notion in my head (definitely your fault, Megan!) I had to have some (and I had to have it NOW!) so I went in search of my very favourite licorice—the Pontefract cake.

Now if you are not a fan of licorice you may never have heard of Pontefract cakes (also called Pomfret cakes).  They are small roughly circular black sweets made of licorice, and were originally manufactured in England in the Yorkshire town of Pontefract (hence the name) although I am guessing they were not then in the same form they are now.  It has apparently only been since the 19th century that licorice was used extensively for confectionery, before that it was used for medicinal tonics for both humans and horses . . .

Well one man’s medicine is another girl’s candy.  I have very fond memories of receiving a little pack of Pontefract cakes tucked into the toe of my Christmas stocking every year ( . . .  and as neither of my sisters liked them I didn’t have to share . . . ) and that is the licorice I was craving now.  Soft and chewy.  Not too salty and not too sweet.  So I went searching . . .  and searching . . . and searching.  Could I find any of my most favourite licorice in the local area?   Of course not.  That would have been far too easy.  (When I asked at a couple of local stores and supermarkets if they carried Pontefract cakes, I was met with blank stares or sent to the the bakery section.  Sigh. )

Never mind.  If that is my biggest disappointment this week I have little to complain about.  I found I can still buy my favourite licorice on-line but until that arrives I did manage to find myself a very tasty alternative to subdue the immediate cravings and  ‘tide me over’ and, as an added bonus, the pretty black and gold packet it came in also gave me something fun to sketch. 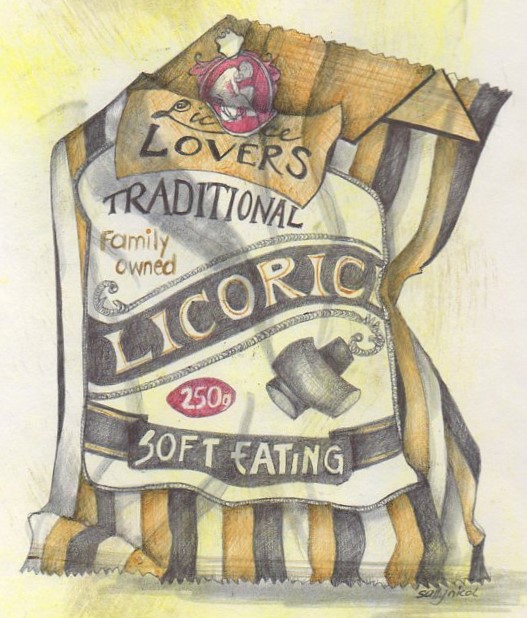 The ancient Egyptians believed licorice aided in vitality and longevity.
Large quantities of it were found with in King Tutankamun’s tomb — perhaps he was hoping to live longer in his next life?

Posted by sallyinthehaven on November 16, 2018 in Uncategorized

← ‘Give a girl the right shoes and she can conquer the world.’ Marilyn Monroe.
‘In ancient times cats were worshipped as gods; they have not forgotten this.’ Terry Pratchett. →