‘I speak over 2000 languages, including Dodo and Unicorn.’ Polynesia the Parrot. (Dr Dolittle)

I saw a program the other day in which children were asked who their favourite superheroes were.  Not surprisingly all the usual suspects were there—Superman, Spiderman, Batman, Daredevil, The Hulk, Wonder Woman, The Flash . . .  Out of idle curiosity I then did an online search and found a survey in which adults were asked the same question—and the results were almost exactly the same.  (What? No Deadpool?)

While I admit I love to watch the Marvel-movies these days, I can’t say I ever identified with any particular superhero when I was growing up.  I remember I used to watch the Superman TV series with my dad (along with really old re-runs of Flash Gordon (‘Flash, a-ah, saviour of the universe’) although I don’t think he can be counted as a superhero as he didn’t have any real superpowers) but my dad enjoyed these shows much more than I did.  When I was younger I always thought these shows were kind of silly, but the older I get the more I enjoy them.  Colours, lights, explosions, aliens, implausible plots, buff-bodies in lycra and body-armour . . .  I mean, what’s not to like?

And I started to wonder—if I had to pick a superpower for myself, what would it be?   Mmmm, so many to choose from.  I am not keen on flying at the best of times, so that one is out.  Reading peoples’ minds? (I think I would prefer not to know.)  X-Ray vision? (eeerk—that’s just creepy.)   Invisibility? (meh.)

Then something happened this week which brought on another of those ‘WTF?’ moments (I seem to be having them a lot of lately) which decided it for me.  My superpower of choice would be the ability to talk to animals, a la Dr Dolittle (‘ . . . if we could talk to the animals, learn all their languages, maybe take an animal degree . . . I’d study elephant and eagle, buffalo and beagle, alligator, guinea pig, and flea . . . )

On Wednesday I came home as usual to a pack of silly, raucous, over-excited little dogs, who barked and bounced and jostled and hounded me (ha-see what I did there?) until I eventually changed into my daggy-duds and was ready for our afternoon walk.  (Well—not  Molly.  Molly decided a couple of weeks ago that she was never going to go walking with us ever again—but that’s a whole other story.)

So we left Molly sitting in the front window guarding the house and Mabel, Maude and I set off for the park.  All good.  We played on the grass, barked at the big scary dog around the corner (from a safe distance), met and chatted with some friends and then headed out along the river walk towards the beach.  By this time everyone else seemed to have gone home for their dinner so I let the girls off their leads so they could stop and sniff and explore (and wee) to their little hearts’ content.

(When I say ‘explore’ Maude usually roams far and wide—as long as it is within a six foot circumference of me, and Mabel rarely leaves my right heel . . . )

Anyway, there I was, happily walking along, looking at the water, watching the birds (wondering whether I should have brought my sketchbook with me) when I suddenly realised that Mabel was no longer at my side. Looking over my shoulder I found the girls sitting close together on the path about 100 yards behind me.  Just sitting . . . and watching me walk away.  I called them to me.  No response.  I called again.  Nothing. They just continued to sit quietly and watch me.  I scanned the area to see what might have stopped them. There was nothing.  Or at least nothing I could see.  No other people, no other dogs, no other . . . anything.

I called them to me again.  Nope.  They moved not a muscle.  Sigh.  As I started back towards them they stood, turned, and headed for home.  Well, okay then. Home it is.  They didn’t appear upset, or scared, or distressed, but something—some sound, smell, sight—or notion—had stopped them dead in their tracks, and left me clueless. They may both be a bit scatty at times but this was weird even for them—and they have always come to me when called.

When we got home they greeted their long lost sister Molly, ate their dinner and settled in for the evening as if nothing untoward had happened.  And perhaps it hadn’t.  Perhaps there was nothing freaky going on and I was reading too much into it.   Maybe they had just had enough of walking and didn’t want to go any further (I guess there is a first time for everything).  Or perhaps (and I think this is the most likely option) they were trying out a new doggie-jedi-mind-trick on me (in which case—it worked.)

I’m resigned to that fact that I’ll never know what was going on in their wee heads that day (or any other day for that matter) but I can’t help but imagine how cool it would have been to have had the ability to look my girls in the eye and asked ‘What the . . . .?’  — and actually received an answer.

Now, that would be something to blog about . . .

Post Script:
If my girls could have superpowers of their own, I wonder which ones they would choose? 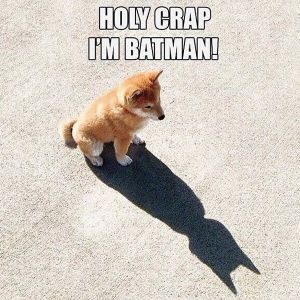 Posted by sallyinthehaven on July 21, 2017 in Uncategorized