‘I had a dream that I was awake and I woke up to find myself asleep.’ Stan Laurel.

I love to watch my dogs sleep.  They always look so comfortable and content.  Unlike me, they never seem to suffer from disturbed sleep. No tossing, no turning, no thrashing about.  (No thumping the pillows or rearranging the bedclothes.)  They just find a nice, sweet spot, turn around three times, and settle in.  I often wonder what they dream about.  “Chasing rabbits,” my dad would say.  Watching Maudie now and listening to her excited little ‘yip-yips’ as her nose twitches and her feet paw the air, it’s easy to imagine that’s exactly what she’s doing (although I don’t know that Maudie has ever seen a real bunny . . . )

Scientists have been performing sleep and dream studies for decades but still do not seem to be 100% agreed on why we dream.  The most popular theory is that dreams work together with sleep to help the brain sort through the information it has collected during our waking hours.  Dreaming helps us process what to remember and what to forget.

As it seems that humans and dogs have very similar sleep cycles (stages of wakefulness, rapid eye movement (REM) and slow wave deep sleep) perhaps dogs dream for exactly the same reason we do.  Rather than chasing rabbits, Maudie is probably reliving all the sights, sounds and smells she encountered during the day, deciding which ones she should discard and which ones are important enough to keep (there’s a new big scary dog moved in around the corner . . . the little kid down the street always has lollies in his pockets . . . I hid my favourite ball on the couch behind the cushion . . .)

I rarely remember my own dreams.  I know I do dream, and dream often, but I rarely remember the details.  This past week I has been a little different.  I have had some seriously weird dreams.  Really vivid, surreal, almost nightmarish dreams—some so freaky they remained with me when I woke.  I was trying to think why that would be—why these dreams seemed so different—and then I had a thought (it happens sometimes) . . . could my whacked-out dreams be an unexpected by-product of all the (industrial strength) flu medication I have recently been taking?

I had never really thought about that before but now I was curious, so I looked it up.  (I looked it up on the web, because who reads the teeny-tiny printed (‘Please read carefully’) foldouts that come in the medication boxes?  I tried that once.  Not only did I give myself serious eye strain, but the list of possible life-threatening side effects nearly scared me to death . . . )  Anyway, I found that there are in fact numerous drugs used in cough, cold, flu, allergy, motion sickness and (get this) insomnia medications, which have been linked to dream-altering states and vivid nightmares.

(How unfair would it be to be suffering from insomnia, only to take prescribed meds, finally fall asleep and then be hit by screaming nightmares. Talk about adding insult to injury!)

Weird dreams have also been noted as a side effect of anti-depressants, pain medications, blood-pressure meds and drugs to help people stop smoking.  So it seems that while we are happily ingesting any and all pharmaceuticals to cure whatever ails us, we are also unwittingly inviting in all manner of creeping night terrors to join us in our misery as well!

Happily, so far, my girls have been healthy enough that I haven’t had to ply any of them with much medication of any sort, but my own experience this week has made me realise that this is something I should probably bear in mind should they need any ‘medicating’ in the future.  If their sleep patterns are indeed akin to ours, it stands to reason that any drugs they receive might well affect their sleep patterns (and dreams) too.

I admit, this somewhat worrying to me.  Maudie is a happy little dog and would probably quickly shrug off any bad dream (just wave her ball under her nose and she’d be good to go) but Mabel and Molly are both somewhat highly strung at the best of times (that’s putting it politely) and the idea of them (and therefore me) having to cope with raging bouts of doggie-nightmares doesn’t quite bear thinking about . . .

Posted by sallyinthehaven on June 30, 2017 in Uncategorized

‘I reckon being ill as one of the greatest pleasures of life, provided one is not too ill and is not obliged to work until one is better.’ Samuel Butler.

I am not at all sure what Samuel Butler was thinking when he said being ill was ‘one of the greatest pleasures of life’.  What a strange thing to say.  I have been what my father used to call ‘sick as a dog’ all week and I can see absolutely no pleasure in it whatsoever . . .

As you can probably tell, I am a mite grumpy.  I don’t like being unwell and I have felt absolutely miserable for over a week now (nothing life threatening—just some flavour of miscellaneous virus that happens to be doing the rounds . . . along with a cough . . .  and a runny nose . . . and a monster headache . . . ) and at time of writing I am showing very little sign of improvement.

(I don’t get sick very often but when I do I go all in. I know they say things usually get worse before they get better but hey—give a girl a break—please!  I am well and truly over it. Well, no.  I’m not over it, as in ‘I’m feeling better’. I’m over it, as in ‘I’m fed up’.  Perhaps I should have said that to begin with. Oh dear God I’m rambling . . . )

Anyway, I think the thing that bothers me most (apart from the actual feeling like crap part of course) is that there is very little I can actually do about it.  I can take a tablet for my headache, and another to stop my nose running, and I can keep up the fluids, and rest when I can . . . blah, blah, blah (we all know the drill) . . . . but in the end I really just have to wait it out.  My body will heal itself when it is good and ready and not before.

You know, it’s so easy to sink into the mire when you feel dreadful (nobody likes me, everybody hates me, think I’ll go and eat worms . . . ) and I find I have to constantly pull myself up and remind myself—’It is only the flu, Sal!  You will get over it.  This too shall pass . . . ‘

And perhaps, in a round about sort of way, that is what Samuel Butler was getting at.  Perhaps he meant that by being ill (but not too ill) one might be forced to remember what a pleasure it was when one felt well . . . 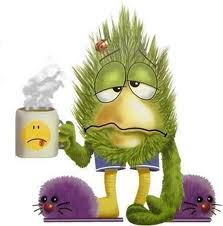 Posted by sallyinthehaven on June 23, 2017 in Uncategorized