RSS
← ‘I speak over 2000 languages, including Dodo and Unicorn.’ Polynesia the Parrot. (Dr Dolittle)
‘A camel is a horse designed by a committee.’ Alec Issigonis. →

A couple of months ago, David, the owner of our local movie house, The Plaza Theatre, asked me to do a tidy-up job on an original 1940s advertising board he had recently acquired.  Having never tackled anything like that before I was a bit nervous about taking it on, but I said I’d give it a try.

(This was ‘sight unseen’ of course.  When David told me about the board I had it in my head that it was going to be about the size of a sandwich-board, so I was somewhat taken aback when he brought it around and I realised it was actually taller than I was!!)

I regret now not taking a photo of it as soon as it arrived it but I didn’t think about at the time.  By the time I did think about it (first photo below) I had already spent two days cleaning, scrubbing and hand-sanding 60 years of dirt, mould and general ickiness off it.  (My girls helped, as you might imagine.)  It had seen some wear and tear for sure.  The sides and edges were particularly knocked about, and it was covered in dings, dents and cracks, along with thousands of pin holes and lots of tiny little (almost invisible) nails (possibly the remnants of long-ago staples) which I discovered when I started sanding and repeatedly caught my fingers on.  (I can honestly say I worked on this until my fingers bled . . . )

It took a couple of weekends and a good deal of trial and error as to what materials to use (and not to use) and many repeated admonitions to the girls of  “No.  NO.  NO!  Go over there.  Go sit over there. You’re good girls, but PLEASE DON’T STAND ON THE BOARD!”, but in the end it was done, and I was reasonably pleased with the final result.  It was a fun project and I enjoyed having a try at something a bit different.

To cap the whole experience off, David unexpectedly gave me a bunch of free movie tickets for my efforts as well!!  Woo Hoo!! 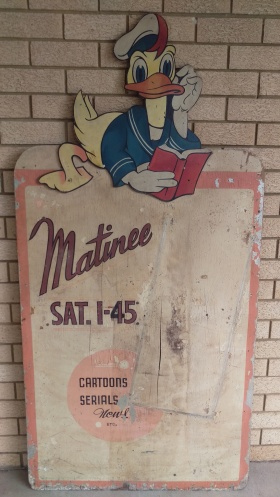 Donald Fauntleroy Duck was created by Walt Disney when he heard Clarence Nash doing his “duck” voice while reciting Mary Had a Little Lamb.  Nash voiced the character from 1934 to 1983.

Donald first appeared on the silver screen on June 9, 1934, in the animated short film, The Wise Little Hen, dancing to the Sailor’s Hornpipe. He then went on to star in seven feature films and won an Oscar in 1943 for ‘Der Feuhrer’s Face’.

Posted by sallyinthehaven on July 25, 2017 in Uncategorized

← ‘I speak over 2000 languages, including Dodo and Unicorn.’ Polynesia the Parrot. (Dr Dolittle)
‘A camel is a horse designed by a committee.’ Alec Issigonis. →