RSS
← ‘Habits are cobwebs at first, cables at last.’ Proverb
Someone once asked Somerset Maugham if he wrote on a schedule, or only when struck by inspiration. →

‘Happiness is your dentist telling you it won’t hurt, and then having him catch his hand in the drill.’ Johnny Carson.

A couple of days ago I noticed my Maudie was doing a strange licky-licky slurpy-slurpy thing with her mouth. I thought she had probably got a chew stick (or some other equally gross thing) stuck in between her teeth and, knowing she might not be able to sort it for herself, called her over to have a look.  Well as soon as she realised I wanted to have a look in her mouth it became a game of  ‘betcha-can’t-catch-me-and-hold-me-long-enough-to-have-a look‘, and she then proceeded to drive me mad for the next half hour as she ducked and weaved and giggled and wriggled and all but wagged her tail off—having the time of her life.

In the end I gave up.  I feigned indifference.   ‘Nope—that’s it.  Not interested any more.  Go away from me. No really—go away and sit over there, I don’t want to play any more.’   Works every time. 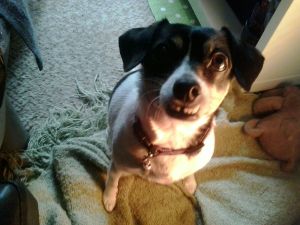 She sidled up beside me and as she sat gazing up at me I realised that a tiny white thing was protruding at right angles out of her mouth—and that tiny white thing turned out to be one of her bottom teeth.  Not quite thinking it through, I put my hand down to her face and—she was off—grinning gleefully and galloping madly about the house.  The game was on again.  Sigh.

It wasn’t until later on that evening when she was fat and fed and dozing on the couch next to me that I managed to get my fingers on the tooth, and as she woke abruptly and pulled away, the tooth came out.  Just like that.  She licked her doggy lips once, had a half-interested sniff at the offending tooth I showed her, and went straight back to sleep.  Too easy.  She now has a very engaging gappy-tooth smile, which bothers her not a whit.

If only sorting out my own dental issues was that easy.

I am not exactly sure how long it is since I went to the dentist last (my last couple of ‘Check Up Reminder’ cards seem to have mysteriously gone astray) but I am thinking probably around 18 months.  I know—tut, tut.  Checkups every six months, yada yada.  It’s the same with losing weight—we know what we are supposed to do but . . .

I don’t like dentists—there I said it.  I don’t like them—even the ones that don’t go around hunting and killing lions on their days off.  I am pretty sure my own dentist does not do that.  In fact, I’d go so far as to say that he is probably a very nice man, although, face it, you do have to wonder about someone who picked a career that involves looking inside people’s mouths all day.  Urk.

Despite my aversion, I had to make an appointment for myself this week.  I had a hot-and-cold-stingy-ouchy thing going on which I just couldn’t ignore any more.   So I rang the surgery, and the only appointment I could get was the morning of the first day of my three day break from work.  And somehow I also found myself booked in for a teeth ‘cleaning’ as well.  Sigh.

I spent most of the morning in the surgery.  My appointment for the clean with the hygenist came and went and I eventually got in to see her 35 minutes late.   My appointment with the dentist himself was supposed to be right after the cleaning, but he was also running late—so I had to go back out into the waiting room and wait another 20 minutes.  And then—when I finally got into the surgery—he took xrays, poked, prodded, gave me an injection, drilled a bit, ‘tidied up’ a bit  (wtf does that mean?)  and said he couldn’t find anything really wrong and the hot-and-cold-stingy-ouchy thing was probably just a ‘sensitivity issue’ which can happen as we age.  Mmmmm.  Thanks for that.

And the cherry on the top of the whole experience was the receptionist asking me if I wanted to pay for it ‘all’ today.  (ALL? Good God, do I need a bank loan?  Answer – almost.)

I eventually got out of there 2 hours later, $415 lighter, and, I suspect, still with the hot-and-cold-stingy-ouchy thing I went in with.  I’ll let you know when the drugs wear off . . .

Posted by sallyinthehaven on September 24, 2015 in Uncategorized

← ‘Habits are cobwebs at first, cables at last.’ Proverb
Someone once asked Somerset Maugham if he wrote on a schedule, or only when struck by inspiration. →

6 responses to “‘Happiness is your dentist telling you it won’t hurt, and then having him catch his hand in the drill.’ Johnny Carson.”