RSS
← Donald Duck. “Quacking” people up since 1934 . . .
‘I believe every woman should own at least one pair of red shoes.’ Terry Tempest Williams. →

‘A camel is a horse designed by a committee.’ Alec Issigonis.

As usual, it got to about Thursday this week before I realised I had not even begun to think about what I might write for my regular Friday post.  (I keep thinking this is going to get easier but it never does.  Sigh.)  Anyway, in a bit of a panic, I went in search of my little ‘blog book’ where (when I think of it) I note down items that have caught my interest and therefore might (hopefully) also be of interest to others.  I hadn’t seen that little book in some time and it took a bit of searching but I eventually found it hidden underneath 4 sketchbooks, 2 pencil cases, a pile of scrap papers and a bunch of crayons which had come loose from their box.  This did not bode well . . .

I sat down and started to read through my notations.  Nope.  Nope.  Done it.  Nope.  Boring.  Sigh.  ‘Why would anyone . . .?  Nope.  Camel milk.  Say what?  Camel milk.  Huh.  I have no recollection of reading, or watching, anything (ever) about camel milk.  I realise of course that camels do produce milk—they have babies after all—but beyond that I don’t recall ever giving it another thought.

But I had noted it in my book and my interest was piqued (again??) so I went in search of camel milk . . . 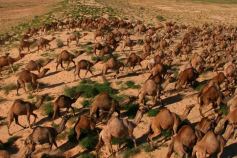 And guess what?  It turns out that camel milk is the ‘next big thing’!  Who knew?  Not me, and seemingly not very many other Australians either.  Camel milk might be big business elsewhere in the world but in Australia it is still a fledgling industry.  There are only around 10 camel dairies in the whole country but from the amount of buzz online it would seem reasonable to assume that these enterprises are set to expand and develop.  They seem unlikely to have any issues around stocking their dairies at least—Australia is home to the world’s largest population of wild camels.

(Camels were imported here in the early 19th century to be used for transport and heavy work in the outback but when they were no longer needed they were set loose to fend for themselves.  Designed ‘by a committee’ or no, they found themselves particularly suited to the harsh Australian conditions and they throve.  There are now hundreds of thousands of them roaming free across the country.)

Of course, just because there are so many camels wandering free doesn’t mean they are automatically willing to happily stand in line and wait to be milked.  Catching them is difficult (and expensive) and once caught it can then take another 2-6 weeks to train a wild camel to the point where it can be milked. They also yield around four times less milk than a cow, so I guess it is hardly surprising I haven’t spotted camel milk on any of our local supermarket shelves just yet.

But give it time.  These camel dairies (sorry, but that still sounds so weird—’camel dairies’) are gaining momentum and heading out of cottage industry status into more commercial concerns so availability will slowly go up and prices will eventually come down. And, reading the research, there certainly do seem to be significant health benefits (if you are in to that sort of thing).  Camel milk has more fat and protein and less cholesterol than cow’s milk.  It is three times higher in vitamin C than cow’s milk and 10 times higher in iron.  It is also high in unsaturated fatty acids and B vitamins but lower in vitamin A and B2.  (Oh, and apparently it tastes good too.)   And if you are not much of a milk drinker (like me—hardly ever touch the stuff) other products like cheese and ice-cream (much more enticing) are now also becoming more widely available.

Wow.  Considering I knew nothing about the subject when I started I seem to have just written a substantial promotional advertisement for the camel milk industry! Yikes!  Sorry about that.  (I swear no one was paying me for it—but perhaps they should have been!)

Still, I have left it all too late to re-write now so there you have it.  Camel milk.
All I have to left to say is—here endeth the lesson!

Posted by sallyinthehaven on July 28, 2017 in Uncategorized

← Donald Duck. “Quacking” people up since 1934 . . .
‘I believe every woman should own at least one pair of red shoes.’ Terry Tempest Williams. →

14 responses to “‘A camel is a horse designed by a committee.’ Alec Issigonis.”