RSS
← ‘Art is too serious to be taken seriously.’ Ad Reinhardt.
‘When the flower blossoms, the bee will come.’ Srikumar Rao. →

I heard a news report the other day where yet another young man had been arrested on suspicion of being a terrorist sympathiser.  When one of his neighbours was interviewed about the arrest she said that she was not at all surprised the man had been arrested because he was definitely ‘weird’.

Now I don’t know whether this man was guilty of being a terrorist sympathiser or not, but the thought came to me that there could be a lot of people out there in the world in serious trouble if one of the main criteria for being considered a terrorist suspect was merely to be considered a little ‘weird’ . . .

Unfortunately, it’s a sign of the times.  So many awful acts have been perpetrated upon unsuspecting and innocent people over the last few years that any sort of behaviour not deemed absolutely ‘normal’ instantly arouses suspicion.  The authorities are now even actively encouraging all of us to keep an eye on each other, which would be great if we were all doing it to ensure that our friends and neighbours were all okay and not in need of any help, but, sadly, the intent seems more to be on the lookout for any ‘odd behaviour’ that might reveal an underlying evil or sinister motive.

I think that’s kind of sad—and just a tiny bit worrying for those among us who may have the odd strange little habit or quirk that someone who does not know us well might misinterpret as suspicious or dangerous behaviour.  (And no, I’m not talking about myself in particular here, just in case you were wondering . . . )

To be a little bit weird is not all that new of a thing.  The world has always been full of weird (and wonderful) people.  History is rife with them.  Polite society commonly refers to them as ‘eccentrics’. (Not-quite-so-polite labels include abnormal, aberrant, odd, queer, strange, peculiar, bizarre, outlandish and freakish.)  To be eccentric means to be unconventional, slightly strange or ‘off centre’ and, according to Dr David Weeks (Eccentrics: A Study of Sanity and Strangeness) some of the characteristics defining an eccentric person include: 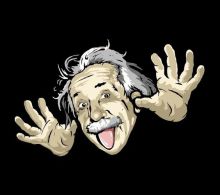 creativity and intense curiosity
idealism (they want to make the world a better place)
a happy obsession with one or more hobbies
high intelligence
opinionated and outspoken
mischievous sense of humour
little interest in the company of other people (or their opinions)
non-competitive, nor in need of validation or reassurance from the rest of society
are aware of their difference to other people

(Does any of this sound familiar?  Take this short quiz to see how eccentric you are.  Go on—I dare you.)

So, eccentrics are often highly intelligent, nonconformist introverts whose creativity and curiosity knows no bounds.  Unlike those diagnosed with a mental illness, eccentric people have not lost touch with reality—they know they are dotty, but they are usually quite happy with their dottiness.

Dr Weeks’ study concluded that eccentrics were happier and healthier than the rest of us, saw doctors far less often, lived longer than their non-eccentric counterparts and certain eccentric individuals (such as Albert Einstein, Dr Patch Adams, Nicola Tesla and Alexander Graham Bell) had made major contributions to mankind.

Well, if that is what being ‘weird’ is, it doesn’t sound all that scary to me.  In fact, I think it sounds pretty cool.  Perhaps what we should be doing is more actively encouraging individual eccentricities and oddities instead of trying to smother them and make everyone conform to the ‘norm’.

And maybe, just maybe, if more of us were to take a leaf out of the eccentrics handbook every now and again and really embrace our own inner weirdness without worrying so much what other people might think, we might not only become a happier and healthier population but perhaps become a little more tolerant of all the other weirdos out there as well.

It’s definitely something to think about . . .

Posted by sallyinthehaven on September 23, 2016 in Uncategorized

← ‘Art is too serious to be taken seriously.’ Ad Reinhardt.
‘When the flower blossoms, the bee will come.’ Srikumar Rao. →

9 responses to “‘You say freak, I say unique.’ Christian Baloga.”